Australian’s love affair with debt - how big is the risk?

If Australia has an Achille’s heel it’s the high and still rising level of household debt that has gone hand in hand with the surge in house prices relative to incomes. Whereas several comparable countries have seen their household debt to income ratios pull back a bit since the Global Financial Crisis (GFC), this has not been the case in Australia. Some worry Australians are unsustainably stretched, and it is only a matter of time before it blows up, bringing the economy down at the same time. Particularly now that global interest rates are starting to rise. This note looks at the main issues.

Australia - from the bottom to the top in debt stakes 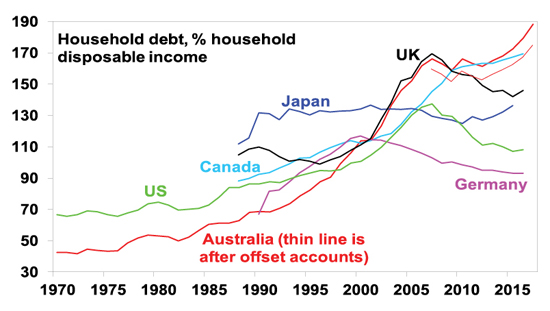 Why has debt gone up so much in Australia?

The increase in debt reflects both economic and attitudinal changes. Memories of wars and economic depression have faded and with the last recession ending nearly 27 years ago, debt seems less risky. Furthermore, modern society encourages instant gratification as opposed to saving for what you want. Lower interest rates have made debt seem more affordable and increased competition amongst financial providers has made it more available. So, each successive generation since the Baby Boomers through to Millennials have been progressively more relaxed about taking on debt than earlier generations.

It’s not quite as bad as it looks

There are several reasons why the rise in household debt may not be quite as bad as it looks: 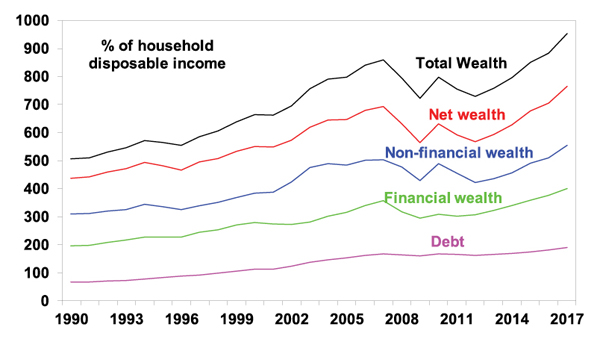 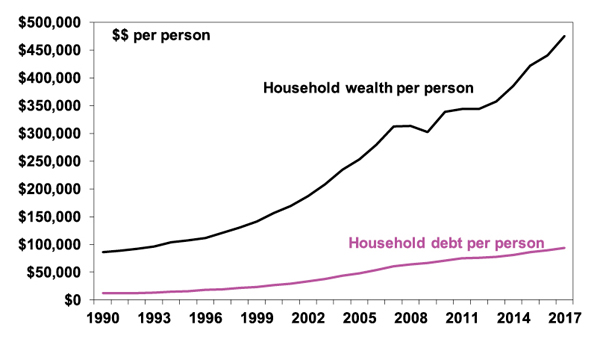 As a result, Australians’ household balance sheets, as measured by net wealth (assets less debt), are healthy. Despite a fall in net wealth relative to income through and after the GFC as shares and home prices fell, net wealth has increased substantially over the last 30 years and is in the middle of the pack relative to comparable countries. 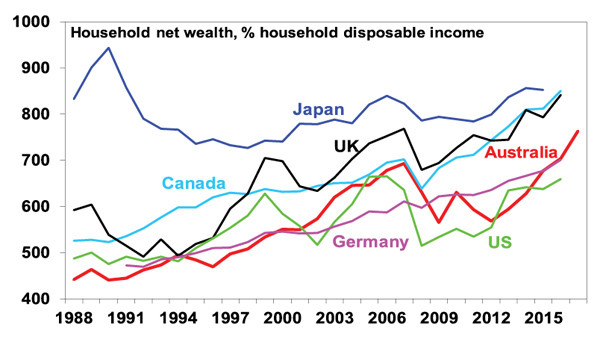 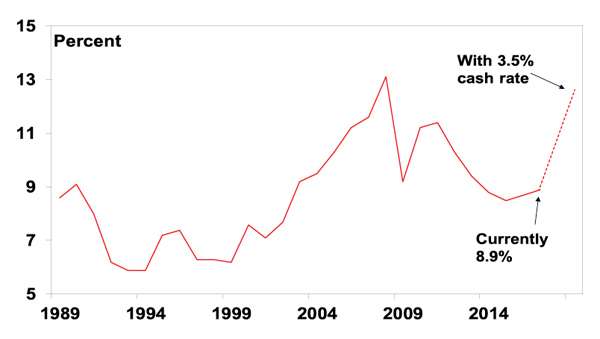 So what are the risks?

None of this is to say the rise in household debt is without risk. Not only has household debt relative to income in Australia risen to the top end of comparable countries but so too has the level of gearing (ie the ratio of debt to wealth or assets). 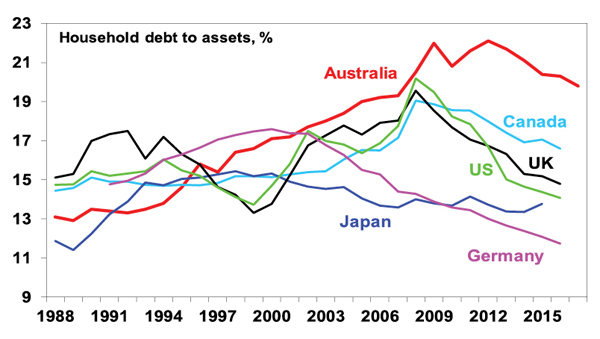 It certainly increases households’ vulnerability to changing economic conditions. There are several threats:

– the rise in debt means moves in interest rates are three times as potent compared to say 25 years ago. Just a 2% rise in interest rates will take interest payments as a share of household income back to where they were just prior to the GFC (and which led to a fall in consumer spending). However, the RBA is well aware of the rise in sensitivities flowing from higher debt and so knows that when the time comes to eventually start raising rates (maybe later this year) it simply won’t have to raise rates anywhere near as much as in the past to have a given impact in say controlling spending and inflation. And so, it’s likely to be very cautious in raising rates (and is very unlikely to need to raise rates by anything like 2%.)

– high debt levels add to the risk that if the economy falls into recession, rising unemployment will create debt-servicing problems. However, it is hard to see unemployment rising sharply anytime soon.

– high debt levels could become a problem if the global and local economies slip into deflation. Falling prices increase the real value of debt, which could cause debtors to cut back spending and sell assets, risking a vicious spiral. However, the risk of deflation has been receding.

4. A sharp collapse in home prices

– by undermining the collateral for much household debt – could cause severe damage. Fortunately, it is hard to see the trigger for a major collapse in house prices, ie, much higher interest rates or unemployment. And full recourse loans provide a disincentive to just walk away from the home and mortgage unlike in parts of the US during the GFC.

5. A change in attitudes against debt

– households could take fright at their high debt levels (maybe after a bout of weakness in home prices or when rates start to rise) and seek to cut them by cutting their spending. Of course, if lots of people do this at the same time it will just result in slower economic growth. At present the risk is low but it's worth keeping an eye on with Sydney and Melbourne property prices now falling. But high household debt levels are likely to be a constraint on consumer spending.

While the surge in household debt has left Australian households vulnerable to anything which threatens their ability to service their debts or significantly undermines the value of houses, the trigger for major problems remains hard to see. However, household discomfort at their high debt levels poses a degree of uncertainty over the outlook for consumer spending should households decide to reduce their debt levels.